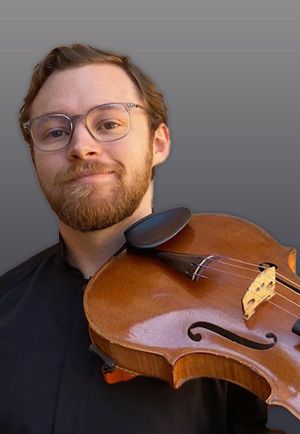 Sam Pedersen was appointed to the Houston Symphony viola section in April 2022. Prior to joining, he was a member of the New World Symphony and the Civic Orchestra of Chicago. Other engagements have been with the Lyric Opera of Chicago, Grant Park Music Festival, Houston Grand Opera, and New York Philharmonic as a Global Academy fellow.

In addition to spending one summer as an orchestral fellow, Pedersen was a member of the New Fromm Players for two years at the Tanglewood Music Center. It was there that he dedicated time to the preparation and performance of contemporary repertoire, working alongside leading composers in the field. Highlights include the U.S. Premiere of Julian Anderson’s Third String Quartet as well as the World Premiere of Augusta Read Thomas’ Magic Box, for String Quartet and Percussion Quartet. His chamber music studies include mentors such as Norman Fischer, Andrew Jennings, Dawn Upshaw, and members of the Juilliard, Brentano and Pacifica quartets. Previous summers have been spent performing at the Madeline Island, National Repertory Orchestra, and Bowdoin music festivals.

Pedersen was raised in Batavia, IL. He holds a master’s degree from Rice University and a bachelor’s degree from DePaul University. Principal teachers include Ivo van der Werff and Rami Solomonow, with additional instruction from Lawrence Neuman and Joan DerHovsepian.

Outside of the orchestra, Pedersen enjoys cycling, frisbee, and spending time with his brother, Andrew, member of the Houston Symphony double bass section.