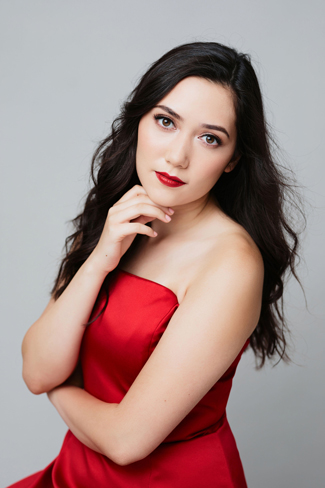 "Young American soprano Calista Ro-Jei Smith made her European debuts this past summer as Lauretta (Gianni Schicchi) in Rimini, Italy and Taumännchen (Hänsel und Gretel) in Berlin. She made her American debut the previous summer as Sister Dolcina (Suor Angelica) and her recital debut this fall for the Galveston Symphony Orchestra recital series. The daughter of classical musicians, Ms. Smith grew up playing the violin and singing in the children’s choirs of the Houston Grand Opera and the Aspen Music Festival and sang in the chorus for a Houston Symphony recording of Wozzeck that received both Grammy and ECHO Klassik awards. Ms. Smith studied at the Berlin Opera Academy, La Musica Lirica in Italy, the Mikael Eliasen Voice Program at the Curtis Institute and the Young Artist Vocal Program at Boston University Tanglewood Institute and has sung at the Kimmel Center and in chorus with the Boston Symphony conducted by John Williams. Ms. Smith appeared as a guest artist in the Houston Symphony’s Living Room series and won the Silver Medal at the Manhattan International Music competition. This season, Ms. Smith will appear as Paquette in Candide and Oberto in Handel’s Alcina at Northwestern University where she is currently a Junior, studying Opera and Vocal Performance with Pamela Hinchman".